The summary is ours, and ash of illusion, is for the adventitious ~ Saad Jasim

We apologize for omitting those two very interesting Iraqi blogs that has been laying around for a while, the first is Sundus Abdulhadi's Mesopotamian Contemplations, a seldom blogging Iraqi artist based in Canada, she has been making a buzz lately around the Arab media for her painting 'Inana in Damascus', which is a commentary on prostitution of Iraqi women in Syria. Her recent post tells us about the story behind the painting's popularity, from American blogs to Arab media. 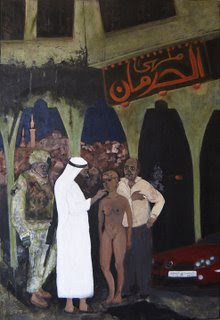 Second blog is for the Iraqi rapper The Narcycist, a previous member of the Iraqi hip-hop group Euphrates which contributed some very good music to the seminal Iraqi documnetary "Voices of Iraq", He has a way of adding Iraqi pharses and names just at the right moments, you can sample some of The Narcyist's politically-themed music on YouTube, such as this seminal song : 'The Letter'. The Narc's blog is an attitude-packed discussion of rap music, politics, and life for Iraqi and Arabs in the Western word, here is a flavor of his writing in which he is ranting about the influence of Gulf money on rap music and the image of Arabs in the West:

So, Here is a new track by some dude called Ron browz featuring the one'n'only Busta Rhymes. Funny, I was bumping THE COMING, Busta's first record, while pumping iron the other day (3ish). Once again, the American assumption that all brown people are the same gets jumbled into one joint. India is not Arabic people. They are indian. And not indian like 'injan you varmits'. Indian like close to Paskistan, India like one of the most beautiful places on earth. Anyway, this is what happens when you invite cats out to places like Dubai or the anywhere in the Gulf for that matter and not invite them out to Palestine and/or Iraq (interchangeable at this point.) Totally totally totally ignorant. Arab money is long if you were in the Gulf, or are someone who has taken advantage of the War. Ask lil'hamoodi in Naseriya what money is. He'll tell you electricity and a carton of two day old eggs (if he's lucky).

I like your blog. Thank you. They are really great .
Some new style Puma Cat shoes is in fashion this year.
The Nike Air Shoes is a best Air Shoes .
Red Shox is good and Cheap Nike Shoes.
If you are a fans of Puma basket,we would offer the good and Cheap Puma Shoes for you .the nike shox torchis best christmas gift now.
Running Shoes
Nike Shox R4
Nike Air Force Ones
Speed Cat
JORDAN 2010
women adidas
Alife Chaussures
Adidas Chaussures
chaussures sports
nike chaussures sports
The information age is really convenient